UMET - Coming to the lab 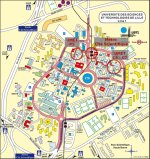 On the campus, the laboratory is located in buildings

All are a couple of steps away (red itinerary on the map) from the Cité Scientifique metro station.

By car, arrive on the campus at the "4 Cantons" metro station and follow the blue itinerary on the map.

To come to the campus from Lille or any of the train stations, we recommend the metro to the Cité Scientifique station using line 1 (yellow line) heading towards 4 cantons.

For more information, have a look at the map. For time tables, and prices: Transpole. From downtown Lille, it will take about 15 minutes to the campus.